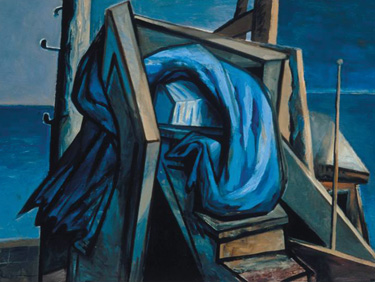 Vibrant and powerful combinations of cubism, expressionism and surrealism, depicting strange structures of amalgamated objects set in spare landscapes; they strike the eye as vortices of barely controlled energy that almost explode from their frames. While the current climate of experimentalism often produces playful work seemingly cut adrift from history and reality, Harsh’s works carry within them the history of modernism, as well as the freight of its partially–realized spiritual aspirations. In an age of obscure, theory–driven work, “centaurlike being[s] composed of art materials and words,” in the words of critic Harold Rosenberg, Harsh’s works are powerful and clear statements of seriousness. Rooted in art tradition and traditional studio practice, they’re required viewing for those who care about the viability of painting—colored mud on stretched woven fibers—in an increasingly mediated virtual world.

In an Artweek review of Harsh’s show (with sculptor Mary Oros) at Arts Benicia in 2008, I wrote:

William Harsh’s powerful and cryptic oil paintings depict stacks or towers of discarded items or mysterious junk set in barren landscapes—in the artist’s words, taken from his website—“jury-rigged assemblies, sometimes fortress-like in appearance.” Although the forms are often ambiguous, with multiple meanings, recognizable objects like ladders, doors, mirrors, drawers, and pieces of rope or cloth thread though the groupings, which are improvised from small sketches, and ruthlessly edited: “in painting … matter is never lost but changed.” The objects seem to be alive or imprinted with human life … Picasso and Beckmann are evident influences, as are Chirico and Guston, but the works effectively and convincingly combine abstraction and figuration; what is depicted seems to be the result of competing constructive and destructive impulses that have battled to a draw…. Harsh animates and metaphorizes his imagined still lifes without falling into the trap of narrative; form and content evolve synchronously in his paintings.

The synthesis of cubism and surrealism that emerges from Harsh’s painting process—sometimes based on drawings, sometimes improvised in paint— demonstrates that the current idea of style—as an identity to be discarded when fashions and fads change—is, if not completely wrong, then at least incomplete.

In these pictures, styles, thought to be safely preserved in the amber of art history, come alive again, disconcertingly. Dreamer, a monotype, presents a sharp-toothed head, its mouth agape with lolling tongue; it has the visceral punch that Picasso’s weeping women and insects had in the Guernica era—and continue to have now. Phoenix depicts a creature or structure with flailing, scorpionlike claws or stingers. Rocinante and Rocinante II depict Don Quixote’s mangy steed as a magically animated assemblage of scraps rising from the dirt, or tottering back into it. Machinations suggests an early Léger landscape with humanoid robots as rendered expressionistically by Georges Rouault. Acrobatics similarly suggests a sculptural collaboration between artists; here, Picasso, Moore and Lipschitz.

Ice Age depicts a tatterdemalion wagon or cart endowed with ribs, and intestines, tentacle or tail. Oracle depicts a rickety platform or lectern surrounded by poles and scaffolding which a swath of blue cloth coils, serpentlike. The wreckage stacked in Reef clumps into a small mountain topped by an exploratory tendril, while the clustered furniture in End of the Line assumes a beleaguered, defensive aspect.

A talk by Harsh with art historian Dickran Tashjian, an expert on Dada and Surrealism and Machine Age art, is scheduled for November 20, 4-5pm. A note on Art Murmur, www.oaklandartmurmer.com: over the past decade, Oakland has developed a vibrant art scene, often compared with Brooklyn’s. On the first Friday of the month during Art Murmur, some twenty participating galleries, many artist-run, stay open late, attracting sizeable crowds of art lovers. One Yelper’s evaluation: “Outrageously dressed people donning tutus and sipping beer from a brown bag? Check…. Huge variety of art, both disturbing and wonderful? Check. Hipsters, posers, scenesters, kids, and artists all getting along? Check.” Check it out on December 3 (after your November visit to Vessel Gallery). 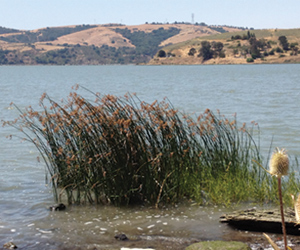 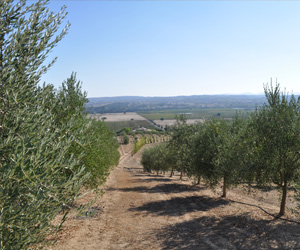 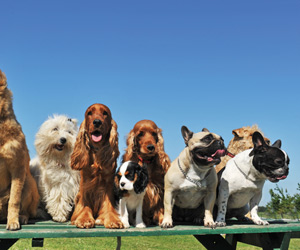