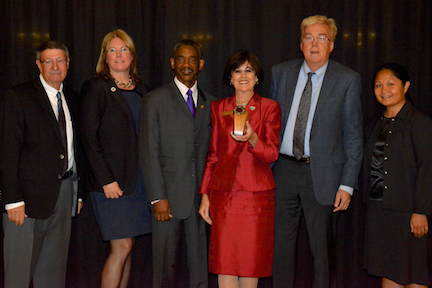 The Metropolitan Transportation Commission (MTC) recognized Solano County Transit (SolTrans) with an Award of Merit on October 22. The Excellence in Motion Award was given in recognition of the significant progress the Agency has made since its inception in December 2010, when the transit systems once operated by the Cities of Benicia and Vallejo were merged. In a press release the MTC wrote, “SolTrans provides sustainable and efficient transportation services for southern Solano County. The agency developed the downtown Vallejo Transit Center, serving approximately 1.4 million annual riders, and the fleet of 21 new hybrid electric transit buses which saves more than $1 million annually in operational costs. SolTrans has consistently recorded annual ridership increases since the merger.”

Presenting the award to SolTrans was MTC Commissioner and SolTrans Board Member, Jim Spering, who is also a Solano County Supervisor. In his introductory remarks, Commissioner Spering mentioned that SolTrans is not another new agency in the Bay Area, but the consolidation of two transit systems into one, in order to provide sustainable, efficient and reliable transit services in Solano County.

Accepting the award on behalf of SolTrans was Vallejo Mayor, Osby Davis, who is the Vice-Chairperson of the SolTrans Board of Directors. He is also one of the Agency’s architects and founding Board Members along with Commissioner Spering.

"It is the way of the future,” noted Mayor Davis about the SolTrans merger. “If public agencies are going to survive, they are going to have to find ways to collaborate with each other because the resources are not there anymore to do it alone.”

Also present to take the stage with Mayor Davis were Mayor Elizabeth Patterson of Benicia, and Solano County Supervisor Erin Hannigan; both of whom also played key roles in establishing SolTrans as founding Board Members. SolTrans’ first, permanent and current Executive Director, Mona Babauta, was also present at the ceremony. “It was a great honor to be recognized by MTC for the positive results that have come out of the consolidation. The SolTrans Board deserved to be commended for their strong vision and political will in creating the Agency; and, it has been a true pleasure to help them realize their desire for a sustainable transit system and increasingly improved levels of service.”

The awards ceremony was held in Oakland at the Scottish Rite Center. The MTC is the transportation planning, coordinating and financing agency for the nine-county San Francisco Bay Area. Four individual awards and six awards of merit were presented at the ceremony. SolTrans was the only Transit Agency to be recognized at the biannual awards program. More information may be found at the following link: http://www.mtc.ca.gov/about_mtc/awards/2014/soltrans.htm

Solano County Transit (SolTrans) is the public transportation provider for the Cities of Benicia and Vallejo. SolTrans provides local fixed route bus, regional express bus, complementary paratransit, dial-a-ride service, and subsidized taxi programs. They deliver safe, reliable and efficient transportation services that link people, jobs, and our communities. The agency is a Joint Powers Authority (JPA) that is governed by a six-member Board of Directors. The Board is composed of two representatives from each member city, Solano County’s representative on the Metropolitan Transportation Commission (MTC), and a representative from the Solano Transportation Authority.