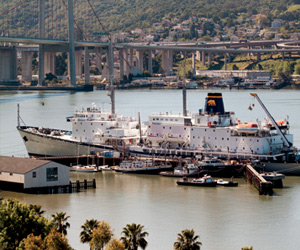 With famed tourist destinations within such easy reach, it's possible we are ignoring what's in our own backyard. Solano County's downtowns are historic, quaint and worth checking out either as a destination or a detour on your next adventure. In our second installment of a 3-part series, we spotlight things to do and see in the seven cities in our own county, just off the I-80 freeway.

Strategically located halfway between San Francisco and Sacramento, Fairfield is Solano County’s second largest city and ninth largest city in the Bay Area with a population of just over 108,000. Fairfield is home to the Jelly Belly factory, Rockville Trails, the Anheuser Busch Brewery and several wineries. It’s also the Solano County seat. The large, contemporary civic complex on the south side of downtown Fairfield, comprising government offices and the county courthouse, features a wide, tree-lined plaza with benches and an attractive water fountain.

Downtown Fairfield, bookended by the Westfield Mall and the courthouse along Texas Street, is part of historic Route 40, built in the 1920’s. Route 40 originally traversed the U.S., from San Francisco to Atlantic City. The sign markers are prominent throughout downtown.

A plethora of world cuisines can be found in the 700-1300 blocks of Texas Street, including Italian, Guatemalan, American, Chinese, Mediterranean, Vietnamese, Thai,

Indian, French and Mexican. Evelyn’s Big Italian Pizzeria & Ristorante serves lunch and dinner and pizza by the slice all day. There’s generally a line out the door during the lunch rush at this popular eatery, next to the corner Starbucks. Another must-visit is Truffle Berries, a bakery with all manner of decadent sweet treats, including some pretty amazing milk and dark chocolate strawberries; and uniquely decadent, cheesecake-dipped, chocolate-dipped strawberries. The bakery also makes a variety of cupcakes, chocolate truffles and cookies. Male or

female, try the unusual PMS cookie, with ruffled potato chips added to the top of a chocolate chip cookie. Truffle Berries is easy to miss if you aren’t paying attention—it’s located at 731 Texas St.

It’s easy to spend a day in Fairfield if you take advantage of the offerings outside of the small downtown. Hiking, Rush Ranch, wine tasting, dining, a Jelly Belly tour and shopping. There’s plenty of shopping and dining at the mall, but you’ll also find small boutiques along Texas Street ranging from cigars to clothing and bikes to beads.

Vallejo, a California Main Street City, has the distinction of being the largest city in Solano County, with just under 116,000 residents in 2010. Tucked between the Mare Island Strait and the Carquinez Strait, Vallejo has an enviable location with miles of waterfront. The city is beginning to emerge from challenges it has faced in the past decade. The real estate market is heating up, the city is no longer in bankruptcy and there are indications of an artistic renaissance in the making. Improvements to the downtown core are having an impact, with the completion of major streetscape projects at the end of Georgia Street and the 110-acre waterfront park. The Vallejo Ferry terminal, situated near the center of the park, is an important transportation hub for commuters with ten daily departures to San Francisco on weekdays; three on weekends.

Vallejo is a culturally and historically rich city. Once home to the State Capitol, it boasts two universities, Touro University and the California Maritime Academy, which is a part of the California State University system, as well as a campus of the Solano Community College. The Vallejo Public Library’s McCune Collection, an interesting collection of printing equipment, binding tools and rare books, was left to the city by Dr. Donovan J. McCune (1902-1976), a Vallejo resident and internationally known pediatrician.

Vallejo’s old town has a mix of diverse retail stores and sprinkling of restaurants, including Good Day Café and the Vallejo Power Company. The Good Day Café, at 314 Georgia Street, is a family-friendly place that serves old-time favorites like chicken fried steak and biscuits and gravy for breakfast; and burgers, Reuben and French dip sandwiches for lunch. Vallejo Power Company, a restaurant at 315 Virginia Street, gets great reviews but has limited hours. For a fine dining experience, Michael Warring, a little known, tiny place (just 17 seats at the 3 tables and counter), is for foodies who like an intimate setting. It gets rave reviews and you’ll need reservations; 8300 Bennington Court, near Hiddenbrook Golf Course.

It’s the art and music scene that is really putting Vallejo on the map of cultural activities. According to Arts Benicia’s director Larnie Fox, as Oakland becomes gentrified and rents increase, artists are migrating to Mare Island, where warehouse space is abundant and more affordable. The historic Empress Theater, at 330 Virginia Street, is creating quite a buzz with a continuous lineup of top musical talent. Benicians rave about the Wednesday Night Ramble, a weekly event that began almost a year ago. The North Bay Allstars perform and host "musical friends" each week, for what locals describe as a highly-entertaining event that features a variety of musical genres.

For a fun Saturday diversion, check out the Vallejo farmers market at Georgia and Marin Streets, year-round, 9am-1pm.