Reliving The Experience With Vintage Motorbikes 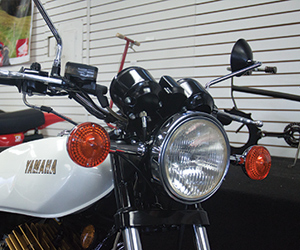 The popular TV show American Pickers comes to mind when visiting Mach 1 Motorsports in Vallejo. Primarily a new Yamaha and Honda dealership, the Mach 1 showroom also features a number of vintage bikes, mostly from the early 1970s. According to the owner, Jeff Leggitt, Baby Boomers are obsessed with 1970s bikes. He calls his collection a rotating museum, and the vintage bikes date from 1965 through the early 1980s; some painstakingly restored, others, because of their age and type, are more valuable when left in used condition. But it’s the accompanying stories that give them special meaning.

Leggitt, an ex-racer with 20 years experience, purchased the dealership in 1997. A few years later, he came across a vintage bike in need of restoration. He related how, in 2000, a friend called him from a barn somewhere in Sonoma about a 1975 Honda. The friend wanted to sell it, but he wasn’t interested until he found out it only had 81.8 miles on it. It was worth a few thousand dollars, but the friend gave it to Leggitt to restore instead. It was his first restoration project, with many more to follow.

Although 1970s era motorbikes are “very hot” right now, Leggitt is quick to point out that restoring vintage bikes is just a hobby for him. But it becomes clear during conversations that similar stories and local connections are the driving force behind his passion. Right now he’s looking for the Honda CB125 a customer sold to pay for his wife’s engagement ring. The guy would like Leggitt to find the exact bike he sold. Leggitt believes all vintage bikes fall into one of two categories for men: “The bike they had or the bike they wanted.”

Uniqueness is essential to any of Leggit’s projects. Each of the vintage bikes on display has a history, and if he doesn’t know it, he’ll happily make one up based on its condition. There’s a 1965 Yamaha that spoke to Leggitt because it had been converted to a dirt bike before dirt bikes were available. Another is the 1966 orange Yamaha that is the same model and color his dad bought him when he was six years old—his first motorcycle. He almost exclusively uses original parts in his restorations, which he searches for “all over the world.” His criteria? Other than something he finds interesting, “The bikes have to be in decent shape. If they aren’t in decent shape it’s too hard to find all the original parts. Even then, finding parts can take years. Sometimes old parts are still available from manufacturers, but I use repops (reproduced parts) only when I have to.”

Twenty-odd bikes in Leggitt’s personal collection are also awaiting restoration, but he mostly does restoration work for customers. “They bring me bikes that have been sitting in a garage for years,” he says. “It can take 8-12 months to restore a bike, so I only start 4-5 each year.”

Leggitt loves it when guys come in, see the collection and one bike will stand out. He often hears, “this is the exact bike I had when I was a kid.” It’s a walk down memory lane like no other. “Something just clicks in guys’ heads when they see these bikes and then it’s a rush of memories and sentiment. They love standing around swapping stories about the time in their lives when they rode motorbikes.  Every bike has a story.”