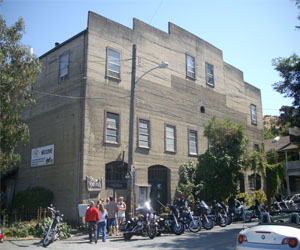 So, first things first: there is a dead seal cub in a giant glass display case and its face is falling apart. I say this not because the unfortunate creature is the first thing you in The Warehouse Café you’d notice—that would be its preserved hulking attacker, the polar bear, which is housed in the same towering case as its prey. The bear has a fine face, if one not exactly suggestive of ursine contentment.

I mention these creatures because the dead bear and the dead seal are fine indicators of who will and who won’t like hanging around Port Costa’s Warehouse Cafe. The place can be a little—I belong to a long line of punsters, so forgive me—polarizing.

The Warehouse is the sort of place some people will call “authentic” with great enthusiasm, while others will use that same word as a euphemism, a rug under which they can sweep a long strain of impolite phrases. Both are right, according to their tastes: some people just won’t feel comfortable here.

Which people? Well, if your sense of decorum excludes shadowy saloon booths, mounted animal heads, Vampiric pinball machines, and swigging German Wheat beers out of chilled mason jars, save yourself the trip. But if your goal is to take in atmosphere at its rumpled, pure fount, friend, your search is over. This place is amazing.

But before reviewing the bar, it’s worth discussing the location. Port Costa, “a census-designated place” numbering less than three hundred souls, is a little quirky town. Not a quirky little town, mind you—some urbanites find the very idea of small towns inherently strange—but a quirky town that happens to be small. To go off the topography, Port Costa borders Crockett and a scenic road/recreational trail that has led to nowhere ever since part of the road collapsed. But in spirit, Port Costa’s rightful borders lie with Savannah, Georgia, Bolinas and maybe some particularly eccentric barrio of Austin.

In the late 19th century Port Costa was a prominent grain port and stopping point for Solano and Contra Costa train ferries, but that heyday is gone: since the twentieth century, Port Costa saw its population shrink to a tenth of former size. Now a visitor here senses himself in a community of deliberate, creative residents without much interest in growing their population, or siphoning off Napa’s tourist trickle. It’s not the sort of town you stop by on the way to something else, either.

Carquinez Scenic Drive, the road leading to the Warehouse, is tortuous, shady and hazardously popular with bicyclists. Take the left toward Port Costa, follow it to the end, and you stop in a gravel parking lot that is cratered like the moon and affords a beautiful view of the straits. It’s also where all the town’s businesses are, and the Warehouse is the biggest of the bunch.

The Café’s building, a giant gray structure, was built in 1879 and used as a grain warehouse. For an indication of the building’s old spirit, you need only look up and see the powerful redwood beams running across the ceiling. As to when the Bar officially opened, the nearest answer I could get was, “Bill bought it in ‘72.” Glad he did.

Inside, the place is spectacularly and delightfully chaotic, a whirligig mix of more than a century of Americana: big booth tables sit beneath garage sale oil paintings, imperious stage curtains cover the walls, and, on top of a wooden poker table with a roof, a fierce looking jackalope stitched out of real animal parts sits looking out on the chandeliers and gleaming bottles.

The main room has an amply-stocked circular bar, a pool table and big slate chalkboards scrawled with the names of suggestively titled martinis. There’s plenty at the bar to order, but true beer fans are advised to ask to see the freezer in the back.

The freezer sits at the far end of a kitchen which cooks up moderately-priced, hearty bar food. In contrast to the surrounding zaniness, the freezer in the warehouse has a cathedral-like ambience. I enter it with a spasmodic sense of joyful worry—I am not wondering if they have my favorite German Wheat Beer, but which of my favorite German Wheat Beers.

In case this all wasn’t enough, there’s an “oddities shop” located inside of the building. In truth, the place is more like an antique store, as all the truly unusual items get hung up or pinned somewhere in the barroom.

The patio boasts a spectacular view of Benicia, has abundant seating, and occasionally hosts live music. It’s where you’ll want to position yourself if you’re a people-watcher, or a fan of motor vehicles. Sundays are big with bikers, and you can see their long gleaming domino line of Harleys stretch across the parking lot, authoritatively sealing the Café’s claim to being a Biker Bar.

But Biker Bar’s are a dime a dozen, and the Warehouse Café is one-of-a-kind. Rather than a Harley, it was another toy belonging to Warehouse guest that was the fittest exemplar of the Bar’s silly energy: a mint-condition Ruby-Red Chevrolet Corvair. The Corvair, you might remember, was the car whose jerky handling caused Ralph Nader to dub it “unsafe at any speed;” it has been parked in America’s cultural junkyard since the Nixon administration. But there it was, shiny and intact, and after a revivifying glass of Ayinger beer, I felt not a little moved at its presence, heartened to know that even a outcast like this was welcome to wander the convoluted route to one of the most spirited, colorful, and ably-stocked bars in the Bay Area.