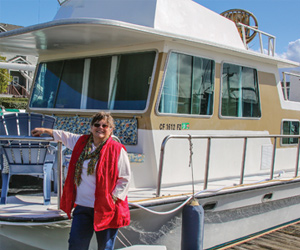 Boats keep sailing in and out of Susan Street’s life.

She took her first sailing trip at 15. Her family of six crowded onto a 28-foot boat with a captain and one crew member and sailed the Adriatic Sea for three weeks.  She and a brother were in school in Switzerland at the time, while the rest of the family lived in Belgrade, Yugoslavia.

The islands were beautiful, she recalls. But boats drifted out of her life while she studied art at Grinnell College in Iowa and as a young adult working in the Bay Area.

Until she met Brent Street, now her husband.  “The first night I met him, he said to me, ‘I have a sailboat. Want to go for a sail?’ And I did,” she says.  The couple was married in March 1991 and five months later undertook a bigger sailing adventure: operating a charter service in the Caribbean. With her characteristic optimism, Susan plunged into the business of entertaining clients aboard a cruising sloop.

Two years later, Susan and Brent returned to San Mateo County and continued sailing for fun. They discovered Benicia while looking for a place to retire. The couple found a condo on the water and liked it so much that they moved here in 2000 rather than wait for retirement. They owned and operated Help-U-Sell on First Street from 2003 to 2008.

After entering semi-retirement, Susan found a new way to have boats in her life.  She began renovating houseboats and has completed three to date. Susan, 71, also manages apartments part time, serves on the board of League of Women Voters Benicia, plays bridge regularly and is in a book club. She loves her family’s monthly gatherings of siblings, nieces, nephews and grandchildren.  She and Brent have four children and two grandchildren.

How did you end up operating a charter sailing business in the Caribbean? Brent subscribed to Sailing World. We used to look through it all the time and in the back were ads for charters. One day I said, “I always wanted to own a B&B,” and he said, “Well, I’m a sailor. Let’s go do it in the Caribbean.”  I said, “That sounds good to me.”

So we bought a 52-foot Irwin. It’s one of those really beefy boats. It had four bedrooms and four heads.  We figured we could do this.  What did I know? I figured I’d be the social director and I could snorkel. I was only 50 – I could do this (laughing).

What did you have to do to prepare the boat for charters? We had to tear out stuff and repaint and decorate and do all this stuff before we could take it to the big boat show where all the boat brokers come and look at all the boats. Brokers will take you on and book you, and most of the bookings come through brokers. But I did my own marketing and got some of our own bookings.

Where did you sail? We had a one-week trip that went from St. Thomas to St. John to British Virgin Islands and came back to St. Thomas. We knew great stuff about each place. You learn quickly where the best lobster is, where the good marinas are.

How long did you operate the charter business? We did it for two seasons. … Each season is November through May.

We decided we weren’t going to continue after that. It was really hard work and I was exhausted. Maybe it would have been good at 40.

What got you interested in renovating houseboats? My sister in Utah said she wanted to move to Benicia but she couldn’t afford anything here. We were talking, and I asked, “Why not live on a houseboat?”

I went to Utah and drove with her and looked at a bunch of houseboats. We found one and brought it here. That was my first time to really get in and design a houseboat. She moved here 4½ years ago.

How did you find the next project? The next one was totally by chance. I was talking to Frank Cassese at Courtyard Customs here on First Street, and he was bemoaning the fact that he had this dumb houseboat and he was going to sell it. I said, “Don’t do anything, Frank, until I get back to you.”

I came home and talked to Brent and he said, “Don’t you think we ought to look at it first?”  He went back and looked at the sturdiness of the boat – the boat part of the boat. The engine didn’t work, but overall it seemed pretty good. Frank said the hull was in good condition, and I trusted him. So we bought it.

What renovation work did you have to do? It turned out the innards were just miserable – moldy and icky. Once we tore everything out, there were windows everywhere. I thought, “This is just great.”

I wanted to maximize the storage to sell it, and my contractor, Greg Emminizer, was so clever in figuring that out.

We got it in February and worked on it for three months. We put it up for sale and it sold in two weeks. That was in May 2011.

When did you take on your third houseboat project? I didn’t do one in 2012, then in 2013, it sounded like a good idea to do another one. I had a whole list of people who wanted one because I kept the names of people who called after that one sold. So I got permission from the harbormaster here and I found one at Glen Cove. It was a bit bigger, and the price was right. I knew I could redo it and it could be a sure-fire live aboard. It sold in six weeks.

What advice would you give to someone interested in renovating a houseboat? Be absolutely sure you can put it where you want it, and be sure of the rules where you want to berth it. All three that I did are in the Benicia Marina, but live aboards can only be 10 percent of the total here.  When I was asking, they had 29 live aboards and they could have 33 or so.

Also, find a good contractor. You have to have a sense of adventure. It’s like remodeling an old house. You never know what you’re going to find.

It helps to have a good sense of design. Either you have it or you don’t. It also helps to have good friends to support you and a husband who knows boats.

Would you like to undertake another renovation? I would love to, but could I get permission? I just don’t know.

I want the paddlewheel in Phil Joy’s yard. I would love to buy it and renovate it. I would live on it. That would be the ultimate for me. I wouldn’t want to do it unless I could do it at the Benicia Marina.

Something like that would be a gas. But I don’t have hundreds of dollars to invest and I’d be a basket case. 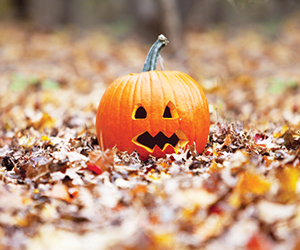 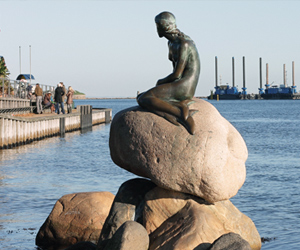