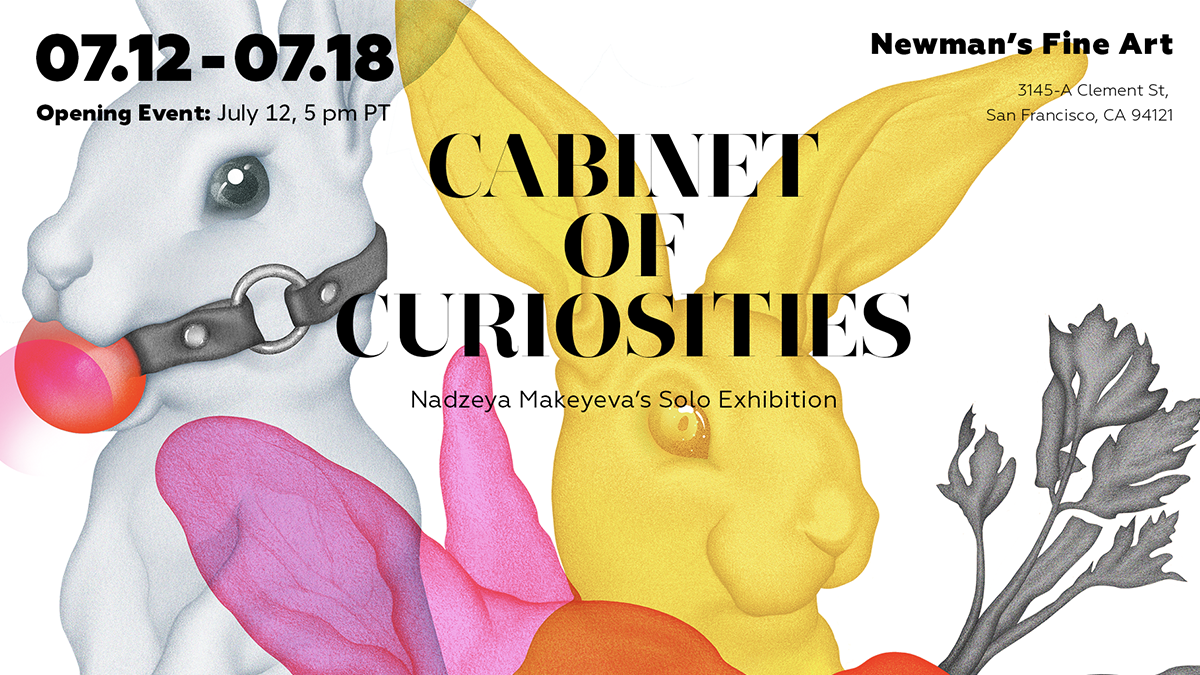 Cabinet of Curiosities Art Exhibition will take place on 12-18 July at Newman’s Fine Art on Clement St. The exposition will feature a series of illustrations by Nadzeya Makeyeva — the artist who lives and works in San Francisco.

In the old days, Cabinet of Curiosities was the name of a collection of amusing and rare objects. it became the predecessor of modern museums. It defined a varied, carefully curated collection of curiosities — both man-made and natural — hidden behind closed doors and embodying the human desire for exploration and knowledge. Artifacts like unicorn horns, unknown and magical creatures like mermaids, unprecedented plants inside — all of these were the contents of the first Cabinets of Curiosities that became fashionable in royal and aristocratic houses throughout Europe during the Renaissance and reached their heyday during the Baroque. Each item in these collections gave its owner the opportunity to tell the story of an epic adventure or, more often, to make one up. Inspired by the Cabinets combining real and imaginary objects, the idea emerged to combine this series of artworks, presenting the audience with their own version of the world in miniature — a fantastic reality augmented by magic.

It is the Cabinet of natural wonders — naturalia (plants, animals and other natural creations) that is the basis of the artistic collection presented to the viewer. However, unlike the traditional collection, the presentation of a curiosity here is not a collection of objects, but an exposition of images of magical creatures, visualized by the vivid imagination of the artist. Nadzeya is fond of European fairy tales and mythology, and she reflects her vision of the creatures described in these legends in her artworks. The collection of images presented to the audience has been assembled over more than ten years. It opens the door into the world of elves and trolls living in the ruins of castles and a moss-covered faun whispers in a labyrinth to the spirits of trees; a world where fairies dance at full moon in enchanted gardens, and plants talk to flowers; a world inhabited by bright and fluffy animals — all of this you’ll find in the exhibited artwork series.

Cabinet of Curiosities is one of author’s most ambitious personal art projects. Illustrations the artist usually creates are news media illustrations, and are too serious and realistic. Therefore, as art therapy, as opposed to excessive seriousness, the author’s unique, lighter, and more decorative technique has been developed. Despite the fact that the author’s commercial works are restrained in color — personal illustrations look iridescent like gems or lollipops. Special technique, combining manual graphics with digital coloring, has been developed over the years, gradually getting refined during the creation of this series.

Nadzeya Makeyeva is a multi-disciplinary illustration artist from Minsk, Belarus who lives and works in San Francisco, CA. She is a member of the Belarusian Designers Guild, Belarusian art popularizer, and founder at Chrysalis Mag  — Belarusian Contemporary Art Magazine. Currently Nadzeya is an illustration artist at proekt.media — an independent media that brings together investigative journalists and reporters.

2005-2011 — BFA from Graphics Department of the Belarusian State Academy of Arts / Minsk, Belarus