Catch The Pickleball Craze At Three Areas In Benicia 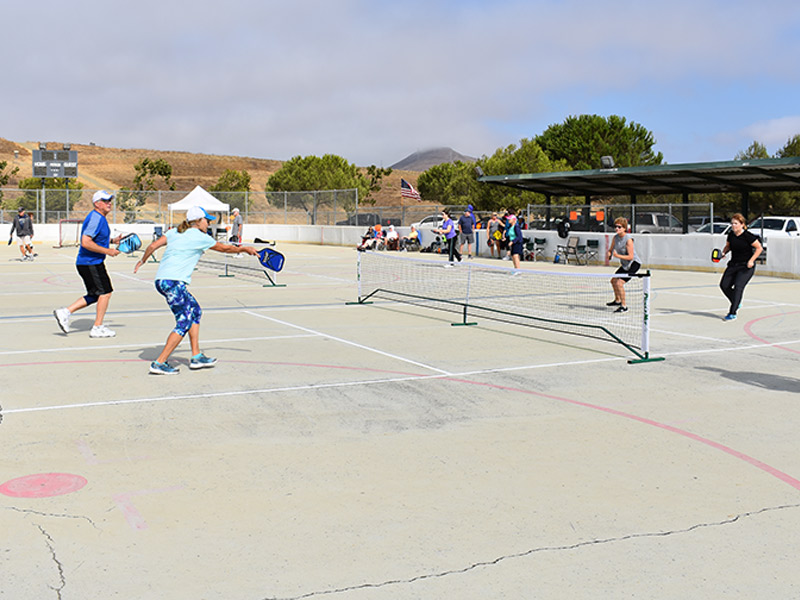 Sounds too good to be true—an outdoor sport that’s fun for all ages, easy to learn, very social and beginners are encouraged. Welcome to pickleball, the fastest growing sport in the US, according to usapa.org (USA Pickleball Association).

With beginnings in the 1970s, pickleball has slowly gathered steam around the world and is now hitting critical mass. It’s especially exploding with those over age 50. Four years ago, after being exposed to the game while visiting RV parks in Desert Hot Springs, Sandy Kirkpatrick and her husband Win caught the pickleball bug and brought the game to Benicia. “You are constantly rotating players and meeting new people. This is not a sport just for those who are athletic. It’s very accessible. Nothing is more exciting than watching people who think they are not good at sports do well at pickleball,” she says, adding, “We have octogenarians playing with their tween/teen grandchildren, and all ages in between.  For older adults in particular, I hope pickleball opportunities here in Benicia allow more people to stay physically active and socially engaged in an atmosphere that is both fun and supportive.”

According to the USAPA, there are over 15,000 indoor and outdoor courts in the United States. The game contains elements of badminton, ping-pong and tennis, but with a lower net using a wiffleball and paddle, played indoor and outdoor on modified tennis courts or courts dedicated to pickleball. Playing with a wiffleball is slower than playing with tennis or other balls.

Although it’s an easy game to understand, the level of competition ranges from a casual pickup game to expert tournament play. The key to the game’s popularity is its social aspect. When playing pickleball one can meet many other players, especially in an area with multiple courts. Once one game is over, players can walk to a neighboring court and join a new game.

Since pickleball was still relatively new to the area four years ago, Sandy got buy-in from Benicia tennis players who helped her get a pickleball court going. She pitched the idea to the parks department and space was identified at the community center multipurpose room. The lines were painted on the court and a net was purchased, but community center pickleball hours are limited. Later, courts were added to the city gym.

Currently there are several courts on which to play in town—two at the city gym, one at the community center and three at the Community Park. Each has specific hours; the courts at the community park don’t yet have an official schedule. Benicia parks department staff recognizes that the pickleball trend is growing rapidly, and citizens want dedicated courts. To that end, the seldom-used in-line hockey courts at the Community Park may be repurposed into dedicated pickleball courts.

On Wednesdays, 2-3pm at the city gym, Sandy will teach rules, techniques, strategy and more to beginners at no charge; or instruction can be had by taking a class through the parks department from certified teacher Patricia Strazzi. “She’s a terrific instructor—once you learn how to play, its rather addictive, says Sandy. “You bring your paddle and balls everywhere you go and walk into a game. It’s a very friendly, social sport.”