It’s speculated that the bicycle was invented out of necessity, after a massive horse die-off in the “endless winter” of 1816, when the entire northern hemisphere was affected by climate abnormalities. Velocipede, dandy horse and Laufmaschine (German for “running machine”) were among the names of the first bicycle prototype of the early 1800s. These were effectively “scoot-bikes” without pedals, which were propelled by one’s own feet. They weighed about 50 pounds, had a steering bar that attached directly to the center of the front wheel, and behind it, a cushioned armrest for the forearms. It must have been quite a feat of strength and balance to safely steer these machines through cobblestone streets and across uneven country terrain, and they were banned from many cities as accidents increased. All manner of human-propelled experiments followed, with varied wheel, seat, pedal and hand-crank configurations, including the iconic high wheel bicycle.

In its first 50 years, the bicycle was so cumbersome and impractical that it was mostly relegated to rich, able-bodied men (hence the name “dandy horse”). But the 1880s were a pivotal decade in this machine’s evolution. The first “safety bike” was the most anatomically similar to the modern bike with pedals centered between the two wheels and a chain for rear-wheel steering.  It became an accessible mode of transportation outside society’s upper echelons and revolutionized the lives of many, particularly women. Susan B. Anthony famously said, “Let me tell you what I think of bicycling. I think it has done more to emancipate women than anything else in the world. It gives women a feeling of freedom and self-reliance.”

If Anthony were around today, she may have been surprised to learn that when it comes to riding, there is still large gender gap in the U.S. According to the League of American Bicyclists, in 2009, women accounted for just 24% of total bike trips in the U.S (bikeleague.org/womenbike).  Data analyzed by three of the country’s largest bike sharing companies showed female ridership was lowest in urban business areas, and during the week. Author Jennifer Langston analyzed this data for sightline.org in 2012 and asked why. She said, “You hear many theories: we’re less willing to ride in traffic, we can’t arrive at a showerless office all sweaty, we never bothered to learn how to fix a flat, our schedules are over-extended, we work longer hours to make the same money as men, those of us with kids spend twice as much time on average caring for them, and many of us squeeze in shopping and errands on the way to and from work.” Studies show that female urban bike traffic increased on the weekends, presumably with less traffic, more time to plan bikeable errands and the option of riding purely for pleasure and exercise.

Benicia has been engaged in an effort to increase bikeability across all demographics since 2014, when the Community Sustainability Commission started collecting data on the challenges and benefits of biking in town. With downtown’s mostly flat and wide streets, lower speed limits and connections to the State Park and Bay Area Ridge Trail, downtown biking has an obvious appeal. Commuting to and from Southampton brings the added challenge of large hills, which can be conquered by an electric bike or searching out routes that avoid the steepest hills. Travelling to and from the Industrial Park is made possible by bike lanes on East Second Street. Bike lanes on both the Benicia-Martinez and Carquinez Bridge connect Benicia to the greater Bay Area, increasing its appeal to serious bikers and those hearty few who bike-commute outside of town.

With age comes wisdom, and as the bicycle nears its bicentennial anniversary, its many types, styles and functions may finally be diverse enough to meet any would-be rider where they’re at. Whether your heart’s desire is to hop on a beach cruiser and leisurely meander the marina, hitch a trailer to the back to transport kids and groceries, take double-bridge rides with the Benicia Bike Club or compete in a race, there is a bike for you. That “feeling of freedom and self-reliance” remains available to all.

Get a full-body workout that includes cardio and is low-impact on the joints
Explore new parts of town
Bond with loved ones and family through bike trips to cool destinations
Challenge yourself mentally to ride longer distances and increase your time
Enjoy the fresh air, sunshine and wind on the face
Let the rhythm of riding be a meditation
Interface with your community in a new way
Cut down on miles driven in your car and save money on gas
Experience health benefits for mind, body and spirit 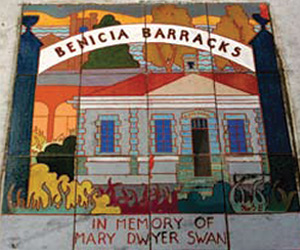