An Interview With Larnie Fox 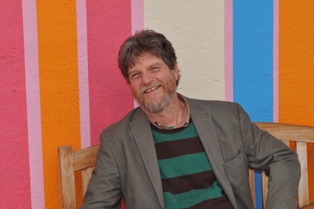 Larnie Fox builds hand-cranked musical instruments and reads science fiction. He loves to cook with his wife and sometimes lets a role of the dice decide where he walks. He has bachelor’s and master’s degrees in painting and drawing and has taught both subjects. He’s run the Children’s Fine Arts program in Palo Alto for the past 15 years and says he can have fun even when working with budgets.
The bearded 54-year-old with a ready smile is the new executive director of Arts Benicia, a full-time post that he assumed on May 18. Larnie will draw upon his background as an artist and manager as he heads a staff of three part-time workers for the nonprofit agency founded in 1986. He worked diligently to land the job.
“I spent a lot of time trying to get the application materials just right, really tailoring the materials to what Arts Benicia was looking for,” he says.
“Arts Benicia hopes to build its educational and community outreach programs with Larnie on board,” says Gene Doherty, chairman of the organization’s board of directors. “Larnie is an artist, a performer and an educator, and he brings all that to an organization that has a strong artist community,” Gene says.
Larnie is married to a fellow artist, Bodil Fox, and they live in San Francisco. His own art has evolved over the years; and he now focuses on the hand-cranked instruments that are used in the Crank Ensemble, a musical group he founded in 2005. His step-daughter, Liv Lopez, is a college freshman living in Santa Barbara.
“He’s really an interesting guy. I can’t wait to spend more time with him,” Gene says. “I can’t wait to see how this evolves.”
Larnie is equally enthusiastic. “I’m just going to throw myself into it,” he says. “It’s going to totally engage all my energies for the foreseeable future, and the possibilities are fantastic.”

How did you learn about the opening at Arts Benicia? What about it appealed to you?
I was working for the City of Palo Alto; and, like with every city, our budget had been cut. So my position was not going to be quite as good as it had been.
To scale down something that you’ve worked hard to build up is difficult, so I started looking around. I wasn’t desperate, I was being very choosey. …
When I saw the ad on Craig’s List, I was interested, especially after I googled Benicia. I didn’t really know about Benicia then.  But we like small towns, we like artist communities, so I checked out Benicia online – Arts Benicia had a lot of good links to the artists on its site. I sort of stalked Arts Benicia online.
Then we came to see Benicia, and we just fell in love with it on our visit.

What skills do you have in running art programs?
They wanted a good communicator, someone who knows about the organizational side, who knows about budgets and fundraising and those administrative skills; plus I have experience working with a city government and I’ve supervised people, including a whole bunch of aides, lots of volunteers, and an assistant. When I’ve worked with artists who came in to teach, I helped them with classroom management, helped them put together curriculum, supervised them — though that’s more playing together than bossing anybody around.
So I told (Arts Benicia) all about that stuff, and they went for it (laughing). The fact that I’m an artist myself helps. They could see I’m a little bit playful and I try to keep that, even when I’m working with budgets.

How did your art evolve from painting and drawing to kinetic sculpture and sound art?
It goes back to my grad school days, when I was painting a lot – painting, painting, painting all the time. Meanwhile, I’m hearing about all these other things — performance art, installations, kinetic sculpture. I never felt the need to limit myself and I didn’t see why I shouldn’t try it.
I was really mastering painting, at least as far as I got, and I got this aesthetic from that. I felt I could take this aesthetic and move it to whatever field I wanted to go into. When I graduated, I lost the studio – well, I had a basement – but I was a little burned out on painting.
I had a show at the University of Utah where I went to thrift stores and just bought vacuum cleaners, rechargeable shavers, on and on; and I basically created a sound sculpture and a kinetic sculpture that made a lot of different kinds of noises, and people loved them.
People sometimes feel disenfranchised from art because they don’t understand it. People coming to this show didn’t feel they had to understand it. It was just amusing.     That kind of set me off on this path. I go back to painting sometimes, but more of my time goes to straight sounds, recording and processing sound. Now my work is centered around kinetic sculpture and sound sculpture.

How would you explain sound art to someone who’s not experienced it?
There are two families of sound art. Some are pure sounds, so as you move through the space, you hear different sounds. …
I make sculpture that produces sound. A lot of it is controlled by motion sensors that respond as people move around the sculpture. Some can be played like musical instruments … it’s more like an installation that makes sound. There’s a little bit of it online if you go to You Tube.
It’s a small field, not well-defined. I like the lack of boundaries. Because it’s not done very much, you don’t run into the problem of “Oh, that’s been done before.”

What type of work are you focusing on now?
My work recently is more with instrument making. Very low-tech, hand-cranked things that could be shown as pieces of art, but they’re more for performance. They’re made with wood, rubber bands, hot glue, Popsicle sticks, bird feathers, wire, bones…. Sometimes they look more like sculpture. Art should be fun.

Your hand-cranked instruments are the basis of the Crank Ensemble. How did that group get started?
There’s an event called the Garden of Memory in Oakland every summer solstice in a big columbarium, the Chapel of the Chimes. It’s this beautiful space, and I was asked to do an installation there in 2004. It involved these little machines running up and down on these strings. The next year my idea was to make a lot of small sound sculptures, control them all and run them through a sound board. But the motor noise was really bothersome. I had all these little motors and it was very hard to isolate the sound from the motor noise, so I started making these things that didn’t need a motor.
I put out a call for volunteers; and I got all these wonderful volunteers, 14 in all. They are the Crank Ensemble. We still have all the same members, still the same core of people. One of them is a school principal, one’s a poet, a couple are artists, people who are in bands, people who work in high-tech industry.
We just keep getting asked to do shows, plus there’s a certain pressure from people in group saying, “Hey, we’ve got do something.”

What is a Dice Walk?
It’s a really good way to explore a community. … It’s a random way of moving through an area, usually cities or towns. You roll a die whenever you have to make a decision about whether to go left, right or straight. You can throw in options for public transit, restaurants – and you roll to see if you go in there.
I mostly do it for exercise, at least once a week and sometimes twice a week. But we have public Dice Walks from time to time. I don’t have any formal plans, but I’d really like to do a Dice Walk in Benicia and invite whoever feels like coming along.
My wife and I did one recently in Manhattan. It was a fabulous day. We didn’t get very far; I think it took us 40 minutes to go two blocks. I make the rules, so we’re allowed to stop if we find something interesting, a restaurant we’d like to try or someplace we’d like to stop.
… Surrealists were really interested in that, in using dice to make decisions about art. Fluxists did that, too. There’s a tradition of artists working with random chance. I’ve used it in my own work in painting and sculpture and in Dice Walks as well.

What if you don’t like the result of the dice throw when you’re painting?
If you’re not pleased, you just paint over it.

What are your goals for Arts Benicia?
My goal is to pretty much not do any big, traumatic changes but run the organization the way it’s running now and get to know it. I hope any changes will come in an organic way. 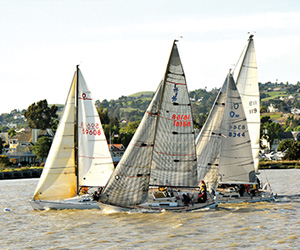 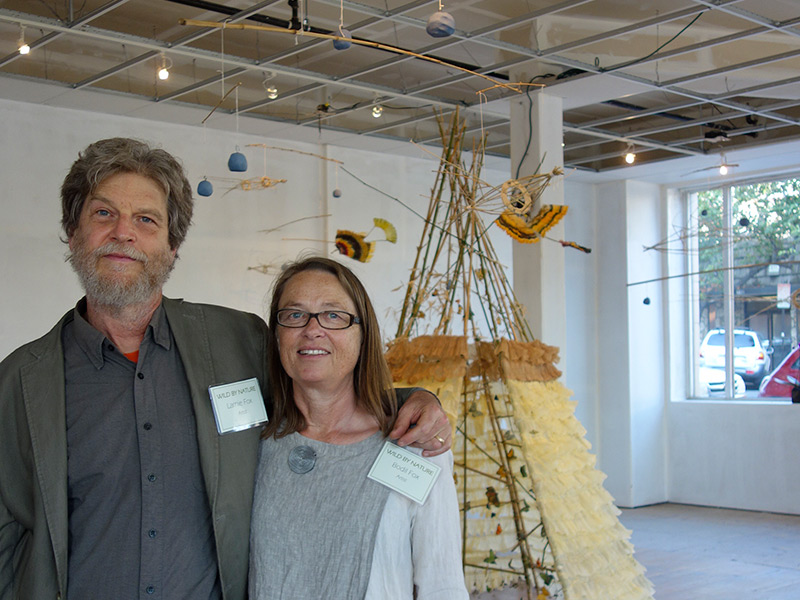 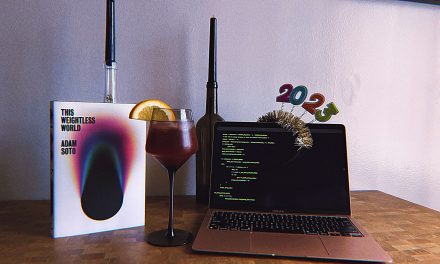